Singer-songwriter and multi-instrumentalist Amy Helm’s third album, What the Flood Leaves Behind, is her most autobiographical yet, both in content and creation. Out now via Renew Records/BMG, these 10 songs represent a gathering of ideas and experiences, friends and collaborators. Yet, the album also marks a landing — a pause for the traveling musician and mother of two young boys who was seeking clarity in her calling and career.

After making multiple albums and performing in far-flung places, Helm returned home to Woodstock’s Levon Helm Studios — casually known as The Barn — just before the pandemic to record What the Flood Leaves Behind and reclaim a sense of self.

“We tried to make it about her voice and about the musicians responding to her and not the other way around,” explains Kaufman. “I wanted her to feel like she had that freedom to be herself on the recordings and she just filled up the whole room. Her singing was coming from this deeply rooted place of family and music and wanting to convey a beauty.”

In particular, “Verse 23,” the track from which the album title is derived, that encapsulates the themes of What the Flood Leaves Behind. Written by M.C. Taylor (Hiss Golden Messenger), the song serves as a sort of “reckoning,” says Helm, “of the good and the bad and everything in between.”

Throughout the record, Helm sings stories of life’s relentlessness. But like she extrapolates from “Verse 23,” the most productive, and often the most healing response, is to create. As a result, What the Flood Leaves Behind serves as a defiant form of self-expression, as Helm steps fully into her own light.

With soul and honesty Elle Sera’s convergence of grit and grace separates her from so many singer-songwriters of today. You can do away with any notion that a singular genre or box would contain Elle’s broad songwriting styles and even broader skills as a vocalist. Effortlessly and authentically, she flows through blues, rock, pop and country wrapped up in a singer-songwriter foothold that stir together to set her soulful vocals on fire with dynamic conviction. With pure emotion and intention–all pouring out of a barely 5’ frame– it’s a true wonder to experience the size of her voice faceted with texture, power and deliberate sensitivity.

While her beginnings as a child were rooted in professional radio, TV, Broadway and film she finished her performing academics as an NYU graduate at Tisch. Leaving college, she began with teaching herself guitar and committed to songwriting. Through her lens of experiences on love, life, joy, pain, loss and spirituality Elle makes tangible her perspective in a way that draws the listener closer, hanging on every word and note.

She has continually traveled to share her music stateside and abroad throughout Europe, connecting with and inspiring audiences, as well now through online platforms and connections. There’s no end to what she’ll explore in heart, soul, music and creativity and that’s the beauty of Elle Sera and her music. Her doing so with authenticity, soul and passion will remind you that this is what music is about; connecting and inspiring us, engaging and putting us in touch with the parts of ourselves that yearn to feel. 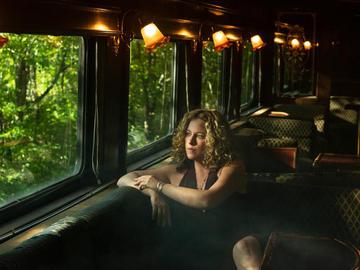